Many governments are now preparing to further enforce plans to shift their focus from passive security to active security. Between 2011 and 2020, a new range of active safety systems will be introduced to prevent collisions, including Vehicle Electronic Stability Control (ESC). The ESC is another improvement to the anti-lock braking system (ABS) and the traction control system (TCS). Its basic function is to use differential braking force and reduce engine torque on a single wheel to prevent the vehicle from slipping and ensuring its stability. This automatic response function improves the stability of the vehicle by reducing the problem of over-steering and under-severing, especially in the case of severe lateral deflection of the vehicle and low road friction. The ABS system must add additional sensors to implement ESP functions, including steering wheel angle sensors, yaw rate sensors, and low gravitational acceleration sensors, all of which are used to measure the vehicle's dynamic response. Clearly, this creates new business opportunities for MEMS sensor manufacturers like Freescale Semiconductor.

In the past 15 years, ESC has made great contributions to the security field through its own influence. Several international studies have shown that through important data collection, ESC significantly reduces the risk of crashes and helps save thousands of lives every year [4]. In fact, some car manufacturers in Japan, Europe, and the United States have introduced the device as a standard configuration for some vehicle production lines, thereby greatly enhancing the safety benefits of customers. Toyota and Daimler estimate that it can reduce the risk of single vehicle accidents in two cars by 35%-42% [5]. NTHSA expects this risk ratio to decrease by more than 30% in 2006, equivalent to a reduction of 9,600 deaths and 252 000 injuries per year. For example, a sport utility vehicle (SUV), which is very popular in the United States, is prone to rollover or steering wheel loss under difficult driving conditions due to its high center of gravity. After equipped with ESC, the possibility of rollover of this model is greatly reduced by more than 80% [6]. With such security, governments have mandated that buses must be equipped with ESC as a safety device: as of 2012, all new vehicles sold in the US with a maximum tonnage of 4.5 tons will have to be equipped with ESC [7]. The European Commission stipulates that all new vehicles will be equipped with ESC as of November 2014; other countries, such as Brazil, Japan and South Korea, have also announced mandatory use of ESCs in 2012 and beyond. In 2010, the proportion of ESC installations in the world has reached about 35%, but there is still a lot of work to be done to achieve full implementation.

The above mandatory requirements will make ESC demand very large, and according to a recent report by Strategy AnalyTIcs, security systems will be one of the fastest growing applications between 2009 and 2014. This mainly refers to the results of the implementation of several major active systems including ESC. It is estimated that by 2014, the number of implementations of ESC systems will increase from the current 26 million to 44 million. iSuppli estimates that by that time, the MEMS acceleration count on the market will reach 47.7 million, of which independent dual-axis low-gravity sensors account for 66%. In fact, the system requirements have been continuously developed and improved over the years to better accommodate the needs of various types of vehicles (such as four-wheeled cars) and different weather conditions. The use of a two-axis low-gravity sensor integrates new functions such as uphill start and electric parking brake (EPB) by accurately measuring the slope of the vehicle on the slope. While adding these features, while meeting the stringent performance requirements of ESC, these requirements combine to present a huge challenge to accelerometers.

In ESC systems, various MEMS sensors are typically mounted close to the center of gravity of the vehicle, and their task is to maintain the motion of the chassis of the vehicle. By adding a yaw rate sensor to measure the angular acceleration of the vertical axis, a low-gravity inertial sensor can be used to detect the lateral acceleration of the vehicle, providing more information to the system. This acceleration is less than 1g when the vehicle begins to slip and loses control. Therefore, the inertial sensor must have excellent sensitivity to sense very accurate low gravity. This means that the noise level of the device output is very low and the zero-gravity acceleration changes little at different temperatures. In addition, the accelerometer must be immune to the high frequency parasitics that must occur on the chassis of the car. A low-energy signal with a large frequency bandwidth can be found in the range of a few kilohertz from normal driving conditions to a few kilohertz from the impact of the road surface. To avoid damaging the sensor response, frequencies above 1 kHz must be filtered out. By definition, inertial sensors are very sensitive to acceleration from any source because this micromachined sensing element is based on mass movement relative to the fixed plate. The sensor output signal is often cleared by electronic low-pass filtering to remove high frequency parasitics. A sensor with over-damping function eliminates unwanted high-frequency acceleration, which provides a mechanical advantage.

Freescale's MMA6900Q is an advanced XY-axis low-gravity accelerometer that addresses all of these challenges. It provides very useful features and functions that make it perfectly suited to the needs of ESC systems. The product is designed to be robust, highly immune to parasitic vibrations, and has a wide full-range sensing range (+/ -3, 5g) to ensure that ESC applications can still be in the +/- 1.7g range during rollover Running inside. It also provides a low noise output with an offset stability of +/- 50mg over the entire vehicle temperature range of -40Â°c to 105Â°C. 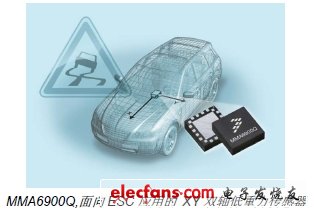 A key component of the device's performance is its proven high aspect ratio MEMS automotive sensor (HARMEMS). "Aspect ratio" refers to the width of the critical mechanical properties of the sensor, such as the spring portion of the integral spring system or the gap between the movable and fixed capacitive plates. This technique achieves this aspect ratio by combining a 25 micron thick SOI layer with a narrow trench defined by DRIE (Deep Reactive Ion Etching). The HARMEMS silicon-on-insulator (SOI) process uses a polysilicon deposition layer (with a gas bridge) to form the electrical connection of the MEMS chip. After the MEMS structure is composed of DRIE, a poly air bridge is formed on the sacrificial oxide layer. Thereafter, timed chemical etching is used to release the MEMS structure. Single crystal SOI provides better control of the DRIE process, resulting in better device uniformity in mechanical properties. The thick SOI layer enhances the rigidity and quality of the moving mechanical components while amplifying the capacitance. Compared with the standard surface micromachining process, its advantages are improved sensitivity and noise performance, and its reliability is improved because it better reduces the adhesion that may occur during use. In combination with glass frit wafer bonding, a packaging technology that is more advanced than vacuum sealing, which encounters considerable air resistance when moving, provides an overdamped mechanical response at a natural cutoff frequency of less than 1 kHz. Finally, due to the aspect ratio of the MEMS process, very small system fault tolerance can be achieved. The thicker the capacitor plate, the smaller the deformation of the sensor structure plate caused by the package stress as a function of temperature. Moreover, HARMEMS has now improved the signal-to-noise ratio, which means that the sensor system's sensing signal gain is reduced. This reduces the number of faults in the sensor, ASIC or package, resulting in a reduction in the total number of failures in the product system. 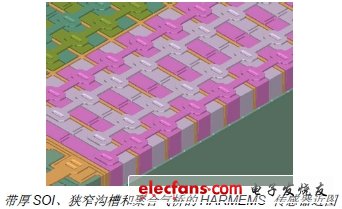 In signal debugging, the proven 0.25-micron analog mixed-signal technology is used, which includes sophisticated analog blocks and high-speed CMOS logic. The high density of 25,000 gates/mm2 allows the integration of complex digital signal processing blocks (DSPs) with a large number of parameter trimming options. Two separate 16-bit sigma-delta converters for the X and Y channels provide an interface between the sensing element and the DSP. Due to the higher oversampling frequency due to Î£Î” conversion, and the increased signal-to-noise ratio and dynamic range, their detection resolution is continuously improved. The device has a maximum recovery time of 4 milliseconds after an acceleration overload. Full digital signal debugging applies the advantages of bridging in implementations such as programmable (filter and acceleration range) and automatic diagnostics. Data integrity features improve the system's fail-safe strategies, such as continuous parity determination of programmed data arrays and SPI commands, to detect potential "bit flips" on the fly. If any of the integrity checks fail, the device will immediately send an error message to avoid misinterpreting the communication fault as a valid acceleration measurement. The device's temperature and all critical internal voltages are continuously monitored, and the accuracy of the acceleration measurement is improved. Once the voltage exceeds the acceptable range or an error message is sent when the temperature exceeds a certain threshold, the device is reset. It provides an 11-bit noise-free data output that reduces the effects of PCB routing. In addition, it provides system designers with more flexibility by providing dual supplies of 3.3V or 5V.

For packaging, the MMA6900Q is available in a 16-lead 6x6x1.98mm QFN package. The industry-standard package makes the PCB design volume smaller and more immune to spurious frequency vibrations. In fact, the first package drum mode resonant frequency is approximately 160 kHz (per FEA result), which is much higher than any potential spurious frequencies found in the car. 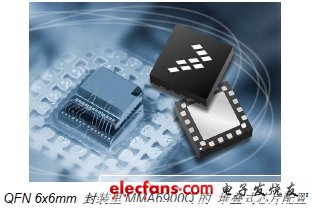 With more than 13 years of experience in the design, testing, simulation and production of airbag sensors, Freescale is able to provide reliable process and technology for the overall measurement safety assessment. This has created new challenges due to the various mandatory regulations adopted worldwide, which have created new challenges, especially in terms of system cost. Automotive suppliers and car manufacturers integrate various security modules, such as airbags and ESCs, to create new system partitions. While the convergence of passive and active safety systems brings some benefits, it also has an impact on the characteristics of the sensors that require a new level of integration. Multi-axis components are required to provide different sensor components, such as yaw rate + low weight or medium gravity + low gravity sensors, providing different module configurations. Freescale is fully prepared to meet these new challenges by combining its systems expertise in new technologies to actively develop these future solutions.