LoRa and NB-IoT are the two most promising low-power WAN communication technologies. But what is the difference and difference between the two? Who will be better than the LPWAN commanding heights?

LoRa: Low-power wide-area IoT technology that is easy to build and deploy

LoRa was born earlier than NB-IoT. In August 2013, Semtech released a new type of chip based on Long Range (LoRa) technology below 1GHz. Its acceptance sensitivity has reached an astonishing -148dbm, and the highest reception sensitivity has been improved by more than 20db compared to other advanced sub-GHz chips in the industry, which ensures network connection reliability. 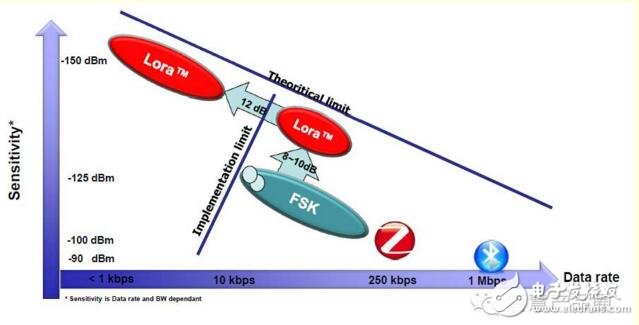 It uses linear frequency modulation spread spectrum modulation technology, which maintains the same low power consumption characteristics as FSK (Frequency Shift Keying) modulation, and significantly increases the communication distance, while improving network efficiency and eliminating interference, that is, different spread spectrum The sequenced terminals do not interfere with each other even if they use the same frequency for simultaneous transmission. Therefore, the Concentrator/Gateway developed on this basis can receive and process data of multiple nodes in parallel, greatly expanding the system capacity.

Linear spread spectrum has been used in military and space communications for decades because it can achieve long communication distances and robustness of interference, while LoRa is the first low-cost implementation for commercial use. With the introduction of LoRa, the situation in the field of embedded wireless communications has undergone a complete change. This technology changes the previous trade-offs between transmission distance and power consumption, providing a simple communication system that can achieve long distance, long battery life, large capacity, and low cost.

LoRa operates primarily in the global free band (ie, unlicensed bands), including 433, 868, and 915 MHz. The LoRa network is mainly composed of a terminal (built-in LoRa module), a gateway (or base station), a server, and a cloud. The application data can be transmitted in both directions. as shown in picture 2.

The advantages of LoRa are mainly reflected in the following aspects:

The link budget of up to 157db allows communication distances of up to 15 kilometers (related to the environment). Its receiving current is only 10mA, and the sleep current is 200nA, which greatly delays the battery life.

2. The gateway/concentrator based on this technology supports parallel processing of multiple channels and multiple data rates, and the system capacity is large.

As shown in Figure 2, the gateway is the bridge between the node and the IP network (through 2G/3G/4G or Ethernet). Each gateway can process 5 million communications per node per day (assuming 10 bytes per transmission, 10% network occupancy). If the gateway is installed at the location of the existing mobile communication base station and the transmission power is 20 dBm (100 mW), it can cover about 2 km in a densely built urban environment, and up to 10 km in a suburb with a lower density.

3. Systems based on terminals and concentrators/gateways can support ranging and positioning.

Key features and advantages of LoRa

Motion Control Sensor is an original part that converts the change of non-electricity (such as speed, pressure) into electric quantity. According to the converted non-electricity, it can be divided into pressure sensor, speed sensor, temperature sensor, etc. It is a measurement, control instrument and Parts and accessories of equipment.