A power meter is an instrument that measures electrical power. It is no stranger to the RF microwaves. The power meter is basically one of the big ones in parallel with the signal source, spectrum analyzer and network analyzer. Of course, it is not as expensive as the previous big brothers.

Figure 1 The composition of the power measuring instrument

Power meter classification First, according to the connection method

The RF or microwave power meter can be divided into two types according to the connection mode in the test system: terminal type and pass type.

The terminal power meter has the following features:

(1) In the common RF and microwave power measuring instruments, the terminal meter power meter has the highest amplitude measurement accuracy, which exceeds the spectrum analyzer or signal analyzer. The typical measurement accuracy can reach Â±1.6%.

(2) Cannot measure high power. The upper limit is usually +20 dBm and the lower limit is about -60 dBm.

The pass power meter uses a coupling device such as a directional coupler, a coupling loop, a probe, etc. to couple a part of the power from the transmitted power by a certain ratio, and sends it to the power meter to measure the total power transmitted equal to the power. The indicator value is multiplied by the scale factor. The industry pioneer of the pass-through power meter is Bird, and the elderly of RF microwave should know. The following figure is a block diagram of a typical pass-through power meter:

The main features of the pass-through power meter;

(2) It is difficult to achieve broadband by a power meter, which is due to the limitation of the directional coupler inside.

(3) Pass-through power meters cannot be used for too small power measurements due to the degree of coupling of the directional coupler. This and the terminal power meter have their own strengths.

Second, according to sensitivity and measurement range 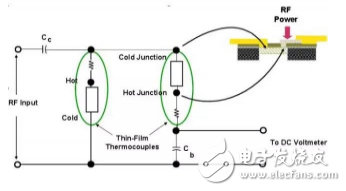 The typical thermal effect power meter of the calorimetric power meter absorbs the high-frequency signal power by the heat-insulating load to increase the temperature of the load, and then uses the thermocouple element to measure the temperature variation of the load, and calculates the high-frequency power value based on the generated heat. This is basically not seen in our lab, and it is mostly used for calibration level power benchmarking.

Crystal Detector Power Meter The crystal diode detector converts high frequency signals into low frequency or direct current signals. The operating point is chosen such that the amplitude of the detector output signal is proportional to the power of the high frequency signal. Transistor detection power meter has been widely used in RF microwave measurement because of its fast measurement speed and moderate accuracy.