On May 11th, the official microblog of PPTV Juwei released a surprising news. The source said that although it has been serving fans for 11 years, it will inevitably say goodbye. Of course, there were media rumours later. The PPTV was a major adjustment in its development strategy. It was not closed but changed its name. 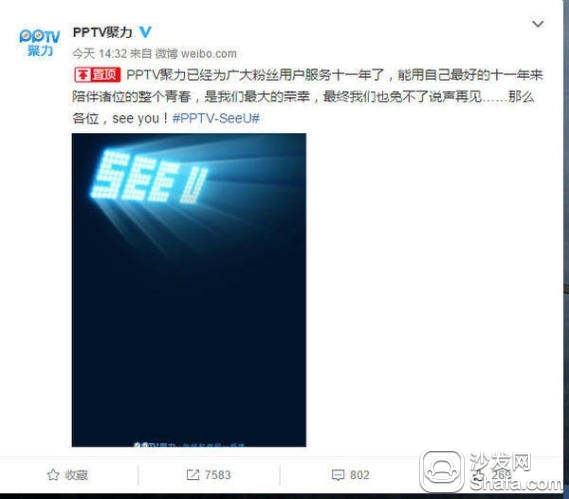 PPTV was established in May 2005. The platform has a large number of video content in Europe and America, popular movies, popular TV dramas, entertainment, sports, information, games and so on. Since last year, PPTV generously won the right to broadcast the world's first football league - La Liga, it is eye-catching.

Everything looks so beautiful, another "music" is rising. However, market competition is so cruel that not only PPTV TVs and mobile phones have been on the market but PPTV's content resource services seem to be facing major changes.

"Close" is sad, and "rename" is also hidden. From the changes faced by PPTV and the competition among brands in recent years, it can be seen that the smart TV field is not as imaginary as it is, and the hunters are encouraged and encouraged.

Compared with the plight of brands such as PPTV, those brands that have mastered their own core technologies, have product production technologies, and are able to timely transform the Internet economy have emerged in a turbulent and contrarian fashion. Cool Open is one of the representative examples. , Operated independently for less than a year, Cool TV has achieved an annual sales target of 1 million.

The success of Kukai is based on the gene and inheritance of traditional manufacturing. As the Internet brand under Skyworth, CoolCube has fully shared the manufacturing capacity and supply chain advantages that Skyworth has accumulated for 28 years. It competes with domestic traditional brands in hardware quality and leads other Internet TV manufacturers. For example, in the aspect of industrial design, Coolo is the first Internet TV manufacturer to win the German Red Dot Design Award for two consecutive times. Cool open A55, T55 two television, respectively, in 2015, 2016 won the German Red Dot Design Award, which shows that Cool open in product design research and development of the focus and profound knowledge.

Kukai is exploring, rejecting the status quo of stability, and unearthing the unknown future; Kukai is wild, with a strong movement and explosiveness, facing the nature calmly, and not being tamed by convention; Kukai is a publicist who does not hide or hide. Self-confident expression of self; cool open is funny, reject stiff and boring, insist on using witty or funny expression. Cool open curiosity creates a love-playing nature, and the cool open focus casts on attitudes and ways of doing thingsâ€”cool opening and playing out.

It is in line with this concept, coupled with the accumulated technology and strong after-sales service of Skyworth, that Coolcom can grow against the backdrop of such a highly competitive market environment. On May 13th, in order to repay the support of the fans, Kukai launched the "Super Save Money Day" event, which does not play bundles or play "free", but only real price cuts, only to allow users to buy the most cost-effective And experience smart products.