[Text / high-tech LED Yue Mengdi] On October 6, the author's concern about the WeChat public account, one after another, exposed the "TPP" related news, there are many "isolated China", "abandon China" and other speculation. Of course, these speculations have also been interpreted and shattered one by one.

What kind of ghost is TPP? Why does it cause such a big response? What effect does it have with LED? I tried to sort it out.

As of October 5, 2015, there were a total of 12 TPP participating countries, which together accounted for 40% of the global economy and exceeded the EU.

In fact, tariff reduction, trade freedom, and financial freedom are not too new. China has long signed bilateral agreements with some of its member states (such as Peru, Western Australia, New Zealand, etc.). What is special about TPP is that it will give multinational companies greater rights in signatory countries, and they can claim compensation for losses caused by changes in the laws and policies of signatory governments. This, in this way, guarantees the great interests of multinational corporations in member states.

There are also economists who estimate that in the current P12 situation, there is a negative 0.14% impact on Chinese exports, and the negative impact is indeed limited.

In fact, although these 12 TPP member countries are not lacking in China's LED export destination countries, LED exports as a small part of China's export trade (although LED exports are also growing rapidly year by year), the impact may not be worth mentioning. .

China's LED exports from January to August 2015 (in US dollars) 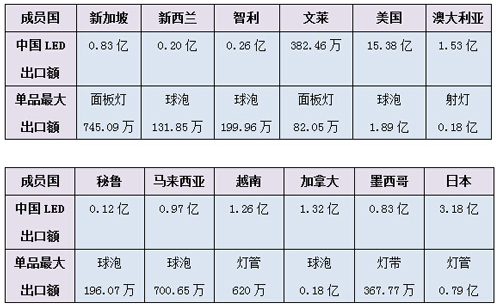