Fashion and technology seem to be two irrelevant areas, but they are not two parallel lines, technology makes fashion more avant-garde, and fashion makes technology out of the cold. The sparks that collide with each of the two intersections are fireworks of different colors. The most typical product is the movie.

â€œFashion is actually a balance between modern technology and traditional craftsmanship. For example, the rubberized crocodile skin that looks very futuristic is actually done by hand. The most important task we have now is to continue with modern technology. And to promote Gucci's original style.", Gucci creative director Frida Giannini tells this.

â€œToday, the luxury industry talks about high technology, just as it is about high-heeled shoes.â€ Vogue International Editor-in-Chief Suzy Menkes once commented on the current state of fashion and technology.

As China's smartphone market gradually transitions from an incremental market to a stock market, the level of competitive incentives is like a bloody sea. Mobile phones are no longer a traditional communication tool, but have become part of the daily lives of most people. In addition to hardware configuration, the combination of fashion and technology has become an important consideration for everyone to choose a mobile phone.

In September 2015, Huawei's flagship product, Mate S, was a product of perfect combination of fashion and technology. Once it was launched, it gained a lot of recognition in the industry. No mobile phone can appear in various fashion activities like Mate S, becoming the darling of fashion. Shortly after the Mate S went public, he and the famous host and supermodel Li Ai interpret the â€œFinger Shadowâ€, and then they made a splash at the â€œVogue China 10th Anniversaryâ€ celebration, which won the favor of many fashion celebrities.

Huawei, which is known for its technology, has long been known for its software and hardware capabilities. Whether it is B2B or B2C, the core technical content of products and services is in place. Therefore, Huawei's mobile phone gives people the impression of rigor, toughness, and business. However, the emergence of Mate S has made people see that the â€œscience and technology manâ€ also has a tender side. 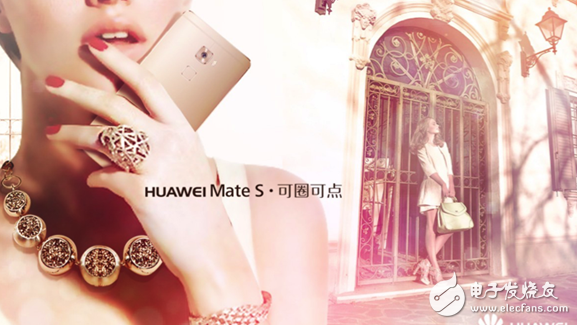 Mate S's industrial design breakthrough Huawei's previous products, achieving a new breakthrough from outside and inside. The 2.5D floating screen expresses the beauty of the water when it overflows. The all-metal curved body on the back and the volume hole at the bottom are like the curves of traditional Chinese arch bridges, creating a perfect grip.

In addition, the Mate S fuselage has a new process difficulty, and the original use of the staggered PCB layout, through the ladder structure battery, to maximize the use of extremely limited body space. In order to realize a beautiful all-metal integrated curved body, the internal battery is creatively presented in a stepped structure, which challenges the industry to be difficult. The seamless splicing of the antenna and the metal body makes the "black belt" and "leucorrhea" become the past, reaching the highest level of craftsmanship in the industry.

The rose gold version of Mate S is the ultimate blend of technology and fashion. Mate S's industry's first rose gold color, whether it is a camera, fingerprint reader, front panel or even back antenna, all the details are covered with rose gold, and with a special glossy sandblasting back shell, the touch is very delicate. Mate S's rose gold is different from gold and pink. The more domineering is the beauty of gentleness. It is no wonder that it can be quickly blushing in the fashion circle, so that fashion cafÃ©s are so addicted to it.

"Golden jade is ruined by it" can only be amazed by the moment, "everything in the table" can win the favor. Mate S's stylish and elegant appearance, in fact, contains Huawei's powerful technology gene, is a true mobile phone. Mate S's groundbreaking fingerprint 2.0, knuckle 2.0 technology, Press Touch and Deer Ear 1.0 technology have brought human-computer interaction to a new dimension.

Mate S's new fingerprint recognition 2.0 technology doubles the recognition speed, unlocks only 0.5 seconds, and maintains a very high recognition rate in special cases such as wet and dry hands and even peeling. In addition to the unlock function, the pull notification bar and the browse album can all be completed. The long press can also answer the call and support the shutter function, giving the user a new one-hand operation experience.

The knuckle 2.0 technology allows the user to perform long screen shots on a single-finger tap screen to capture long microblogs, web pages and more. The double-knuckle tap can also realize the recording function, the operation steps, and the wonderful video pictures can be recorded and shared by others. Users can also perform custom operations according to their own needs.

Press Touch technology extends human-computer interaction from 2D to 3D, bringing a new experience to users. Press Touch's application replaces the virtual navigation bar. Just press the corresponding position on the edge of the screen to use the menu, exit, application list and other buttons. When browsing photos, pressing the screen can also achieve partial enlargement of the image, and the degree of magnification depends on the press. Strength.

At the same time, in the photo, especially the self-timer, Mate S's front soft light with built-in new skin algorithm, allowing users to display perfect self-time performance at any time.

However, behind this glamorous appearance and warm and comfortable experience, it reflects the ultimate pursuit of â€œTechnology Manâ€ for meticulous products. The development of technology is centered around user needs. While dare to innovate, Huawei has also injected elements such as fashion and humanities. From the experience of consumers, Huawei has embodied the "user-centered" technology concept.

In 2015, Huawei's consumer BG smartphone shipments reached 108 million, making it the first smartphone manufacturer in China with annual shipments of over 100 million, ranking third in the world. Today, the space for growth of China's smartphone market has become more limited. The unit price of Huawei smartphones has also increased significantly. Canalys' data shows that Huawei's average selling price per smartphone in 2015 rose from $216 in 2014 to $306. According to data released by Huawei, in the third quarter of 2015, the sales volume of high-end smartphones with Huawei's consumer business sales of over RMB 2,000 increased to 33%.

Of course, there is also a successful attempt by Mate S to rush to the higher end market. It is understood that with the listing and hot sales of Mate S in 48 countries and regions including China, the initial share of Huawei's share in the domestic 4000+ market has increased tenfold. As a flagship product under Huawei's â€œBoutique Strategyâ€, Mate S is not a powerful configuration, but a new trend that combines technology and fashion to bring users a stylish and convenient experience. Today, on the one-machine side, the collision between technology and fashion may be the new direction for the future development of smart phones.